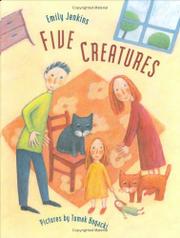 Shared and distinct traits appear in the five creatures in Jenkins’s household—two adults, a young girl, and two cats. Bogacki (My First Garden, 2000, etc.) uses a fish-eye perspective and a schoolchild’s elementary expressiveness to give these comparisons a decidedly mellow, soft-focus feel. “Four who like to eat fish. Three who like to drink milk, one who’s allergic, and one who only has it in coffee. Two who like to eat mice. Only one who likes to eat beets.” The comparisons fluidly shift back and forth, including adult with child, or child with cat, or any combination that fits. There are even those shared if dissimilar tastes: “Five who love birds . . . but not all in the same way.” There are touches of humor: apparently one of the cats can open the cupboard door, and it’s the cats and adults who can climb on high stools. The book has an appealing way of inviting the reader in, allowing for moments of identification: “Two who can read, and one who is learning” or “three who don’t like taking baths.” And it is also good fun to chart the action of the text; it’s not always who you’d think who gets included or left out of the mix. A great introduction to Venn diagramming, but fun enough to start folks grouping on their own. (Picture book. 3-6)