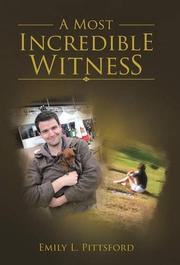 A Most Incredible Witness

In this brief memoir, Pittsford recounts the trials of dealing with her son’s premature death and addressing her own trust in God.

On Sept. 1, 2010, in San Francisco, Pittsford’s 28-year-old son, Tim, witnessed a hit-and-run accident in which a pedestrian was killed. He followed the driver in an attempt to get some information for police. A few days later, Tim mysteriously passed away in his sleep, leaving only a couple drops of blood on his pillow as a clue. The first half of the book details the Pittsfords’ receiving news of their son’s passing, the planning and preparation of memorial services, and the challenge of a mother having to let go of her son, all with a strongly Christian tone. Through a series of seemingly miraculous occurrences, the daughter of the hit-and-run victim comes to learn of Tim’s identity as the witness and his subsequent death, and she reaches out to Pittsford so the two can console each other in their grief. The second half of the book deals with the aftermath: the family’s trying to find a new normal, Pittsford’s daughter’s questioning her faith and recommending that the entire family go for counseling, and the final coroner’s report on Tim’s death. Pittsford’s writing is conversational and easily digested, but various spelling and grammatical errors distract from her narrative; for example, misspelling the Italian word “paesanos” as “pizanos” and using the word “perspective” instead of “respective.” Pittsford comes across as the ideal Christian woman, never questioning God’s will but choosing to follow His plan, regardless of her grief and uncertainty. Some readers may be inspired by her religious strength, while others may find it difficult to relate to this particular grieving method.

A book that will be most appreciated by loved ones affected by this tragedy and those open to a similar response to grief.