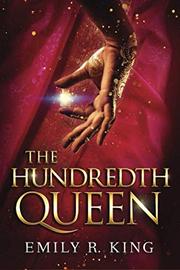 From the Hundredth Queen series, volume 1

Orphan Kalinda was left at a temple as an infant and has always been sickly with a fever, spending most of her childhood in the infirmary at Samiya Temple in this South Asian–inflected fantasy.

Kalinda would have been content to spend her life there, but she is chosen to be the rajah’s 100th rani—a dubious honor, as in taking a 100th wife the rajah is declaring himself equal to the gods. Her journey to the Turquoise Palace in Vanhi has its own trials. One of these is meeting a Burner: a supernatural being who can control fire. In Vanhi, Kalinda finds love and loss, and she uncovers secrets both personal and political. King writes multiple strong female characters, led by Kalinda, who has the loyalty and bravery of spirit to defend her friends even if that means facing death. Kalinda narrates in the genre-conventional present tense, revealing to readers her resistance to the rajah’s cruel manipulations: “if the gods have indeed brought me here, then they know that I will not bend to him. Not now. Not ever.” A prefatory note states that Kalinda’s world is inspired by but not grounded in Sumerian mythology. Strong characterization, deep worldbuilding, page-turning action scenes and intrigue, as well as social commentary, make this book stand out.

This outing opens a trilogy; readers will be eager to get their hands on the next installment.