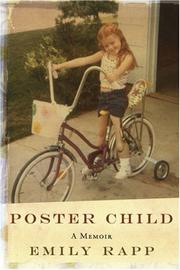 Mature and graceful debut memoir about a childhood struggle to be perfect.

Born with a congenital bone and tissue disorder, the author had her left foot amputated when she was four and was fitted with an expensive, ugly prosthesis; at eight, after several operations, her entire left leg was removed. Rapp devoted her childhood to excelling, to being brave and smart: If I do everything just right, she reasoned, maybe I can make up for that missing leg. Despite her handicap, she biked and swam. She reveled in the compliments of the ladies at church, always clucking about her courage. She loved being told that she was an “inspiration.” But as she entered adolescence, Rapp became more self-conscious. In particular, she worried that she would never catch a man. (She writes with elegance of losing her virginity.) Granted, she had good material to work with. Most people just have to grapple with getting the condom packet open; she had to decide whether or not to remove her leg. During college, her stoicism began to fray, and she wavered under the burden of her own attempts at perfection. In search of a new framework for thinking about disability, she discovered bold theologians who argue that a broken body—Jesus’ broken body—sits at the center of Christianity. This should not be viewed only as a disability memoir. It is also a story of the 1970s and ’80s (the author’s recreation of a popular culture that included stonewashed jeans and too much eyeliner is spot-on), a spiritual memoir of the movement from childhood pieties to adult faith and a confession that will resonate with anyone who spent their youth overcompensating, for whatever reason.

Rapp has excelled again: This book is a blessing.