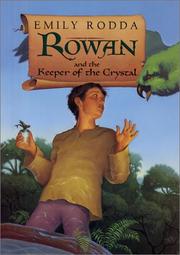 ROWAN AND THE KEEPER OF THE CRYSTAL

Lowly herdboy Rowan (Rowan and the Travelers, 2001, etc.) saves his people yet again in this suspenseful, clever third outing. For centuries, the web-fingered Maris Folk and their mysterious, magical Crystal have protected the coast beyond the Valley of Rin from the barbarian Zebak. When Rowan’s mother, given the task of choosing a successor to the dying Keeper of the Crystal, is poisoned, Rowan suddenly finds himself in a race against time to winkle the antidote out of an oblique old rhyme. With the reluctant aid of the three candidates for Keeper, Rowan gathers the needed ingredients, though it means plunging into one peril after another—to learn, upon succeeding, that it had all been a deliberate test of him and his helpers. Having survived both attacks by wild beasts and deadly political intrigues, Rowan has one more test in store, for at the last possible instant, he realizes that the newly chosen Keeper has been bespelled by the Zebak. Rodda gives her young hero generous helpings of wit and courage, then takes him to the brink of catastrophe; in the end, he makes a correct but scary choice that leads to the destruction of an approaching Zebak fleet. Rowan’s inner (if not outer) stature grows in each stand-alone episode of this well-founded series. (Fiction. 11-13)