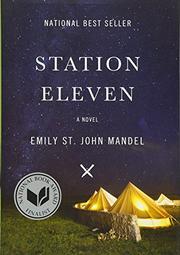 Survivors and victims of a pandemic populate this quietly ambitious take on a post-apocalyptic world where some strive to preserve art, culture and kindness.

In her fourth novel, Mandel (The Lola Quartet, 2012, etc.) moves away from the literary thriller form of her previous books but keeps much of the intrigue. The story concerns the before and after of a catastrophic virus called the Georgia Flu that wipes out most of the world’s population. On one side of the timeline are the survivors, mainly a traveling troupe of musicians and actors and a stationary group stuck for years in an airport. On the other is a professional actor, who dies in the opening pages while performing King Lear, his ex-wives and his oldest friend, glimpsed in flashbacks. There’s also the man—a paparazzo-turned-paramedic—who runs to the stage from the audience to try to revive him, a Samaritan role he will play again in later years. Mandel is effectively spare in her depiction of both the tough hand-to-mouth existence of a devastated world and the almost unchallenged life of the celebrity—think of Cormac McCarthy seesawing with Joan Didion. The intrigue arises when the troupe is threatened by a cult and breaks into disparate offshoots struggling toward a common haven. Woven through these little odysseys, and cunningly linking the cushy past and the perilous present, is a figure called the Prophet. Indeed, Mandel spins a satisfying web of coincidence and kismet while providing numerous strong moments, as when one of the last planes lands at the airport and seals its doors in self-imposed quarantine, standing for days on the tarmac as those outside try not to ponder the nightmare within. Another strand of that web is a well-traveled copy of a sci-fi graphic novel drawn by the actor’s first wife, depicting a space station seeking a new home after aliens take over Earth—a different sort of artist also pondering man’s fate and future.

Mandel’s solid writing and magnetic narrative make for a strong combination in what should be a breakout novel.