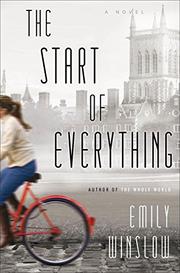 THE START OF EVERYTHING

The discovery of the body of a young woman sets a strange chain of events in motion in Winslow’s second thriller set in Britain (The Whole World, 2010).

Police Inspector Chloe Frohmann and her partner, Morris Keene, are assigned to investigate how an unidentified young woman ended up in a marshy area in the English countryside. Morris has been out on medical leave inspired by an injury he received when completing a solo interview. Chloe knows her fellow officers hold her responsible for his injuries since she didn’t accompany her partner to the scene, and she believes they resent her recent promotion to detective inspector. She’s also in a difficult position with her boss, who has requested that Chloe appraise him on whether Morris is fit for the job. Meanwhile, a very disturbed young woman named Mathilde Oliver is trying to find a student named Katja. The daughter of Cambridge mathematics professor Tobias Oliver, Mathilde tracks down the identities of students and campus personnel when mail is received that cannot be delivered to them. While looking for Katja, Mathilde finds herself in the middle of something she didn’t expect, leaving her to fend for herself in this odd and often confusing story. The book is told in turn by different characters. The author weaves back and forth between the past and future, connecting both the body in the marsh and Mathilde’s quest and eventual fate, while the investigation hiccups along. Each character’s unique point of view impacts the case, but the technique sometimes makes the story difficult to follow. Winslow writes interesting, evocative fiction, although her American roots shine through, and the characters sound more like cast members on an episode of Law & Order than the Brits they are supposed to be. If the book has one central flaw, it’s that the characters are uniformly difficult to like, particularly the female police officer Chloe, and their actions don’t always make sense in the context of the plot.

Although a promising writer, Winslow introduces so many voices, plotlines and characters that readers may need a cheat sheet in order to keep track of the action.