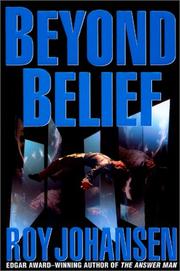 Magician-turned-cop Joe Bailey could use a little magic in his own life. His beloved wife has recently died, and his young daughter Nikki is almost as lost without her as Joe is. He does have his job, however, and it's his salvation. A past master of sleight-of-hand, he's adept at spotting prestidigitating lowlifes—the phony psychics and their ilk who batten on those whose grief, loss, and loneliness have made them vulnerable. Dubbed "The Spirit-Basher" by the media, Joe usually earns his keep as the star of the Atlanta PD's bunco squad. But every so often he gets a chance to strut his stuff on a homicide case, as he does when Dr. Robert Nelson, co-chair of Landwyn University's parapsychology program, falls victim to foul play. Joe finds the body impaled high on one of the walls of Nelson's study, pinned in place by a needle-sharp spike protruding from a piece of modern sculpture. How did he get up there? It's hard to imagine, unless you believe that Jesse Randall, a subject of Dr. Nelson's—only eight but seriously disenchanted already—hoisted and stuck him there telekinetically, a scenario that a lot of people, including some hard-boiled cops, come to believe. But Joe sees the case as one more occasion for speeding up the eye the hand has been quicker than. Paranormal, shmaranormal, he figures; let's find those hidden wires.

Journeyman prose but A-list plotting. As he did in his debut (The Answer Man, 1999), Johansen keeps the wires, hidden or not, humming.

LOOK BEHIND YOU
by Iris Johansen
Fiction