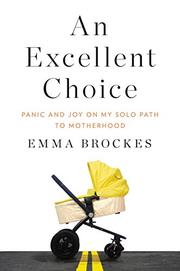 Panic and Joy On My Solo Path to Motherhood

A fertility memoir with a whiff of Tristram Shandy.

British journalist Brockes (She Left Me the Gun: My Mother’s Life Before Me, 2013, etc.) recounts the process by which she and “L” decided to bear children as single, working mothers in a nontraditional but loving relationship. The author spent her 20s in the grip of an all-consuming dream job: writing for the Guardian. The sudden breakup of a three-way work marriage (one of her best friends fell pregnant) propelled her all the way to New York and onto the path toward having not just one baby, but twins, all by herself. Her eccentric narrative hazes over the challenges of same-sex parenting to focus on the fertility industry and the alternative structure that she and L created to make up for their hopeless incompatibility as live-in partners. They found matching apartments on different floors of the same Upper West Side high rise, which enabled them to bring the kids together regularly, but each woman parented her own children to suit herself. Brockes plays up the contrast in fertility treatment styles between England and the U.S., but while she extols the stolidity and sensibility of her national health care birthright, she can’t help but glory in the comparatively free-wheeling American market for intrauterine insemination and in vitro fertilization as one more indication that her adopted country is the “place where the future happens first.” Her quirky, neurotic intensity pairs well with the brisk pace she has crafted after so many years writing to deadlines, and she holds little back. The book speaks to a growing contingent of would-be parents who reach their 30s and 40s and find they have the means and motivation to have kids outside of a conventional domestic partnership, embracing their chosen single parenthood as a form of empowerment. It seems as if almost everyone bearing a child is writing a book about it, but Brockes is too original a personality to fall in quietly with the rest.

A disarming and casually hilarious take on the opposite of co-parenting.