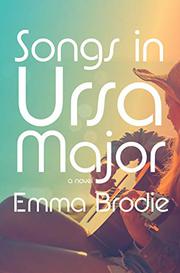 A young musician rises and falls and rises again in the 1970s music industry.

Inspired by the folk rock scene of the late 1960s and '70s, Brodie’s debut novel follows Jane Quinn, an ethereal and talented musician, as she navigates love, loss, and stardom. A seventh-generation native of Bayleen Island, off the coast of Massachusetts, Jane has always led a life imbued with music; her mother was a minorly successful songwriter before her disappearance a decade ago, and Jane is the lead vocalist and guitarist in the Breakers, a local band. The novel opens in 1969 at the annual Island Folk Fest, where Jesse Reid—music’s unassuming, blue-eyed, and handsome megastar—is set to headline. After an accident leaves Jesse unable to perform, Jane and the Breakers are unexpectedly thrust into the spotlight of the main stage—and their lives change forever. As Jesse recovers on the island, he and Jane are drawn to each other through their mutual passion for music and shared sense of loss. After recording their new album and making a few high-profile enemies, the Breakers hit the road as the opening act for Jesse’s 1970 tour. Jane insists on keeping her relationship with Jesse a secret because she wants to be known for her music above all else: “She feared that, if the world knew her as Jesse’s love interest before she’d ever opened her mouth on a national stage, that was all she’d ever be.” When Jane makes a shocking discovery on tour, her life is blown up, and she returns to the island. As she comes to terms with long-kept secrets, she throws herself into her music and writes her magnum opus, Songs in Ursa Major. Throughout the novel, Brodie thoughtfully probes the different ways men and women were treated in the music industry: the men coddled and protected in the face of their faults while the women (especially rule breakers like Jane) were taken advantage of, undercut, and vilified. If the plot feels formulaic at times, Brodie’s writing—about music, family, and grief—elevates the novel.

An enjoyable debut that will appeal to fans of this iconic era.