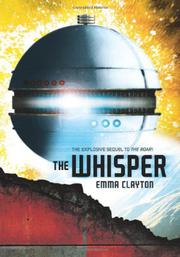 This sequel to The Roar (2009) finds twins Mika and Ellie and the other mutant children using their maturing superpower talents.

In a knockout science-fiction thriller, they attack the Wall that divides the poor multitudes in the North from the relatively few rich in the South. Mika explains at one point: "We hear things you can't hear… we call them The Roar and The Whisper. The Roar is the sound of emotion and The Whisper is the sound of thought." Set in the not-so-far future in the British Isles and picking up right after the finale of The Roar, this story demonstrates thought turned into action. It extends readers' comprehension of the twins' world, providing knowledge of the characters and their superpowers, revelations about the origin of the Wall and details of the landscape of the South in greater depth than in the first book. The third-person narration alternates among the viewpoints of Ellie, Mika and Mika's friend, Kobi, adding interest and suspense, while the well-developed plot, lots of new and creepy monsters and tightly maintained tension keep readers entertained. Heavy themes of economic marginalization are leavened by gadgetry and action. Mixing science-fiction ideas with the tension of a thriller guarantees reader approval. (Science fiction. 10-13)