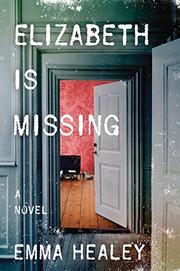 Maud’s memory is failing, slipping further away each day. So how can she convince anyone that her best friend is truly missing?

In her debut novel, Healey deftly evokes the frustrations of Maud and her daughter, both annoyed by Maud’s inability to remember that she bought peach slices yesterday (not to mention the day before), or her own address or the fact that she’s already alerted the police to Elizabeth’s absence four times. Large and small notes blanket the house and fill Maud’s purse with reminders (no more peaches; Elizabeth’s son says she’s OK), but Maud disregards or mistrusts them, questioning her daughter’s authority and Elizabeth’s son’s truthfulness. Healey also compassionately draws the landscape of Maud’s mind, layering the past over the present, blurring the lines between reality and memory. Just as she's worried about Elizabeth in the present, she's troubled by events from her childhood in post–World War II London. Then, she and her parents had a lodger, Douglas. Her sister, Sukey, lived with her husband, Frank, in a big house crammed with odds and ends collected through his furniture-moving business. But Sukey disappeared, too. Both Douglas and Frank were briefly considered suspects. Certainly, Douglas’ close friendship with Sukey and Frank’s mysterious business dealings raised some hackles. But a lack of evidence prompted officials to determine that Sukey likely just ran away. But Maud never believed that her beloved sister would have left of her own accord without saying goodbye. Could the two mysteries be connected? With little to no assistance from the police, then or now, the family must band together to discover the truth. At first, Maud’s disintegrating memory stymies her progress, but soon enough, the elision of boundaries becomes an asset.

A poignant novel of loss.