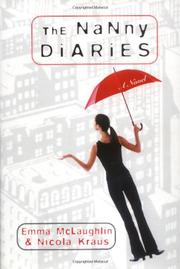 First-novelists and former nannies McLaughlin and Kraus get the details right: in acid asides, they limn the décor, trendy therapies, and the pretensions of social-climbing Manhattanites. It’s the woebegone children who often suffer, according to the authors’ young heroine (her name: Nanny), a child-development major at NYU. Mrs. X, a perfectly groomed Park Avenue princess, hires Nanny to care for four-year-old Grayer, and the girl does her best to comply with a long list of rules. The boy is rarely permitted to play inside the luxurious apartment, eat anything made with refined flour, and so forth. Mrs. X is too busy with committee work and salon treatments (and keeping an eye on her philandering husband) to do much mothering. Though Grayer is a holy terror, Nanny has a way with kids—and a family of her own to give advice when the tot falls ill. Racking cough? High fever? When Mrs. X is away at a spa and has left orders that she’s not to be disturbed for any reason, Nanny’s mother diagnoses croup. But “tragedy” strikes again: Nanny is hoping for a lavish Christmas present but all she gets is earmuffs. When she isn’t microwaving tofu snacks or teaching Grayer the intricacies of the Hokey Pokey, Nanny indulges in daydreams about the Harvard hottie she’s been flirting with in the elevator—and participates in obligatory gripe-and-gossip fests with her girlfriends. Should she tell Mrs. X about the black thong panties that Mr. X’s bitchy mistress left behind? And how about going with them to Nantucket? There’s nothing to buy there except candles and nautical trinkets, and her employers are sure to be at each other’s throats. When Nanny quits, she tells off Grayer’s indifferent parents at last, having discovered they they’ve been spying on her through a nannycam concealed in a stuffed bear.