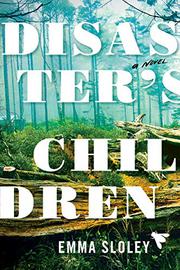 Growing up among privileged doomsday preppers, Marlo has always known that the end of the world was nigh. But she never suspected trouble from within her community.

Climate change, poisoned soil, rising sea levels—the harbingers of ecological collapse prompted Marlo, her adoptive parents, and a group of wealthy, like-minded survivalists to settle a secluded community in the wilds of Oregon. Adopted at 14 months old, Marlo has grown up on the ranch, with only occasional visits to the outside world, a place known as the Disaster among the ranchers. Now 25, Marlo has few friends left now that Alex and Ben have moved out. With sporadic access to the internet, Marlo doesn't get many updates from them about their adventures in eco-activism. But the sleepy wait for an apocalypse abruptly ends when five bald eagles are discovered dead on the ranch with no clear cause of death. Curious about life in the Disaster and restless to participate in the fight against climate change, Marlo makes plans to temporarily leave the ranch. But her overprotective, smothering parents have other ideas. Serendipitously, a mysterious stranger arrives at the ranch. His name is Wolf, and he may be the answer to at least some of Marlo's prayers, as they quickly connect and fall in love. In this, her debut novel, Sloley masterfully weaves together the tropes of dystopia, romance, and mystery. Suspicions and questions abound: Is Wolf too good to be true? Who is posting ominous religious quotations around the community? Who hid the mysterious gun cache? Yet as alarming events compound, the rising sense of menace is undercut by Marlo’s naiveté. Her sheltered life and overdependence on her parents prevent her from seeing the dangers that the reader sees at every corner.

With so many questions left unanswered, this dystopia is ripe for a sequel.