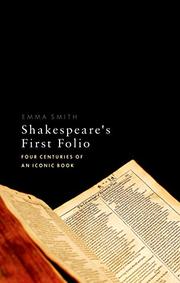 Four Centuries of an Iconic Book

A biography of the most valuable English-language book in the world.

The famous First Folio of Shakespeare’s plays exists thanks to two of the Bard’s fellow actors who pulled it all together seven years after his death. Nearly 1,000 pages long, it took two years to print, and when it went on sale, in 1623, it sold for 1 pound; buyers had to bind it themselves. The first printing was a bullish 750 copies. What happened next is what Smith (English/Hertford Coll., Oxford; The Making of Shakespeare’s First Folio, 2016, etc.) is most interested in: the book as cultural object. Who bought it, and why, and what did they do with it? Smith has traveled the globe to track down copies in order to write her “biblio-biography,” an “attempt to reconstruct the history of one particular book…how that book moved through time, space and, context.” Focusing first on the topic of “owning,” with its individual, cultural, and national desires, she traces in detail the movements of three specific Folios. After passing through various hands, one ended up in Henry Folger’s incredible library/museum (along with 81 others). A second ended up at a Japanese university, and the third went to Oxford’s Bodleian Library in 1624, was sold to a collector, and then came back thanks to fundraising efforts. In the “reading” section, Smith analyzes the range of marks and marginalia made early on in the Folios when they were a “real reading text,” as well as “early female engagement with the book.” “Decoding” is an intriguing look at the intense scholarly scrutiny Folios have generated, including a foray into the possibility of secret codes within textual irregularities. The final two sections deal with the use of Folios in the theater and “perfecting” the Folio: facsimiles, forgeries, and digital reproduction. It’s academic, yes, but thoroughly delightful for bibliophiles and Shakespeare lovers.