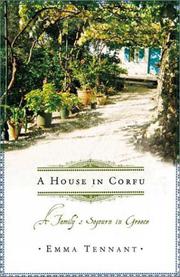 A HOUSE IN CORFU

A Family’s Sojourn in Greece

A Mediterranean idyll from a British novelist (Sylvia and Ted, 2001, etc.) whose parents took up residence on a Greek island in the mid-1960s.

It’s relevant to note that Tennant is British, because her celebration of Corfu’s clear, blue water, warm, golden sun, flora, fauna, and colorful vistas is emblematic of the love affair English artists, poets, and writers have carried on with the Mediterranean over the centuries. There is even the ubiquitous classical allusion. Rovinia (meaning “ruin”), the spot where her parents decided to build their dream house, was the place where the shipwrecked Odysseus was rescued by the island’s princess—or so legend, and some evidence, has it. That romantic tale underlies Tennant’s Arcadian descriptions of beaches and wandering paths, sunsets, and the eccentricities of local folk. The thread that unites her evocations of the landscape is the story of her parents’ house. Before construction could begin, they had to accumulate many small land parcels, each subject to much negotiation and assurances that villagers could continue to use their rights of way. With the help of a local architect, the building of the house (a simple design with huge glass windows facing the sea) went relatively smoothly, even though bags of building materials and fresh water had to be carried up a steep, winding path on the backs of local women. However, it took two years and an imported British colonel with divining rods before a fresh-water source was found near the house; installing electric power took even longer. On frequent visits to the island, Tennant joined her parents at local engagement parties and baptisms; she recounts adventures both political and meteorological, recalls delicious meals as well as village gossip and lore.

Sometimes the sentences are as tangled as the underbrush, but for readers who like their travel-writing as rich as first-press olive oil, this will appeal. (b&w photos)