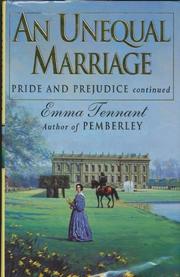 Tennant's wretched second sequel to Jane Austen's Pride and Prejudice (after Pemberley, 1993) has none of the beloved original's wit, brilliance, or biting satire. Nearly 20 years after Elizabeth and Darcy first met, the couple is as much in love as ever—and as young as ever, to hear Tennant describe them. Elizabeth is flirtatious and spry, and she and her 17-year-old daughter, Miranda, are like sisters. Elizabeth's actual sister Jane is still sweet and still around as much as before, despite the responsibilities of her own household and large brood of children. All Austen's other characters are present as well (except for poor Mr. Bennett, who was killed off by the author before her last sequel), plus a few that Tennant introduced in Pemberley. When they're not sitting around quoting themselves from the previous two books, the characters engage in excruciatingly dull conversations meant to further an inane plot that focuses on the Darcys' only son, Edward, whom the reader never meets. Based on hearsay, however, we learn that he is a budding young Wickham who has dropped out of Eton and gambled away the Welsh estate. (He probably thought it wouldn't be missed.) They all knew Edward would come to no good when he was little and insisted on pretending to be a Napoleonic soldier fighting against the British. To top it all off, he's short. Darcy goes to London to clear up the Welsh mess and disinherits Edward, much to Elizabeth's chagrin. There is the standard Elizabeth/Darcy misunderstanding, another entailment crisis, and of course the reconciliation, which is executed so abruptly that the book is over a page later. But at least it's over—for good this time, one hopes. Once was bad enough; twice is unforgivable.