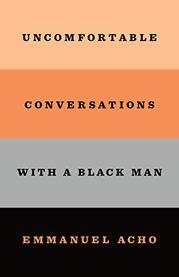 UNCOMFORTABLE CONVERSATIONS WITH A BLACK MAN

In his first book, Acho, an analyst for Fox Sports who grew up in Dallas as the son of Nigerian immigrants, addresses White readers who have sent him questions about Black history and culture. “My childhood,” he writes, “was one big study abroad in white culture—followed by studying abroad in black culture during college and then during my years in the NFL, which I spent on teams with 80-90 percent black players, each of whom had his own experience of being a person of color in America. Now, I’m fluent in both cultures: black and white.” While the author avoids condescending to readers who already acknowledge their White privilege or understand why it’s unacceptable to use the N-word, he’s also attuned to the sensitive nature of the topic. As such, he has created “a place where questions you may have been afraid to ask get answered.” Acho has a deft touch and a historian’s knack for marshaling facts. He packs a lot into his concise narrative, from an incisive historical breakdown of American racial unrest and violence to the ways of cultural appropriation: Your friend respecting and appreciating Black arts and culture? OK. Kim Kardashian showing off her braids and attributing her sense of style to Bo Derek? Not so much. Within larger chapters, the text, which originated with the author’s online video series with the same title, is neatly organized under helpful headings: “Let’s rewind,” “Let’s get uncomfortable,” “Talk it, walk it.” Acho can be funny, but that’s not his goal—nor is he pedaling gotcha zingers or pleas for headlines. The author delivers exactly what he promises in the title, tackling difficult topics with the depth of an engaged cultural thinker and the style of an experienced wordsmith. Throughout, Acho is a friendly guide, seeking to sow understanding even if it means risking just a little discord.

This guide to Black culture for White people is accessible but rarely easy.