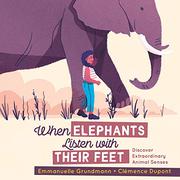 WHEN ELEPHANTS LISTEN WITH THEIR FEET

A clever title appears on each full-page section starter along with appealing graphic art. For example, the chapter about the sense of smell is entitled “On the Nose” and depicts a Black child picking flowers in a field while, nearby, a fluffy dog appears to sniff at a flower. (Human diversity appears throughout.) Each of the eight chapters presents a wealth of information that has been laid out in a way that encourages browsing. Negative space surrounds small blocks of intriguingly headlined text and numerous colorful, charismatic illustrations. Small lessons in the science behind senses are interspersed amid the many short paragraphs about animals all over the planet. The text is graceful and often humorous, with an extensive vocabulary and fairly complex sentence structure. However, both beginning and struggling readers will likely enlist support rather than turn away from such entertainment as the biggest eyeball on record (the colossal squid) or the peculiar communication methods of the Atlantic herring (passing gas). That said, only some terms are defined, and rudimentary knowledge of evolution is assumed. The three sections beyond the standard five deal with vibration, electromagnetism, and a droll mélange entitled “Superhero Animals.” Overall, the book thoughtfully and exuberantly excites wonder in its readers.