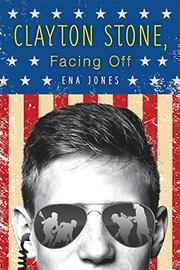 From the Clayton Stone series, volume 2

Only a few weeks after capturing a ring of kidnappers in Clayton Stone, at Your Service (2015), 13-year-old Clayton Stone is assigned his second mission for the Special Service.

A security breach at the elite Sydney Brown Middle School coupled with the strange behavior of his son, Kyle, sets President Hampton, the United States’ second African-American commander in chief, on edge. Impressed with Clayton’s success on the earlier case, President Hampton personally requests the white teen’s assistance. His mission: to enroll at Sydney Brown, befriend Kyle, and uncover what’s behind his unusual behavior, all while keeping his spy eyes out for anything that might explain why Sydney Brown has become a target. Unfortunately, part of this undercover gig also means playing against his old teammates in the most important lacrosse game of the year. Funny and infectiously enthusiastic about his covert responsibilities, Clayton will have readers gladly going along for the twisty-turny ride filled with blackmail, political scandal, and some serious lacrosse. But what makes this series so special is that it also has heart. Whether it’s Clayton’s loyalty to his friends, his memories of his deceased grandfather, or his unwavering sense of justice, this is a kid worth rooting for. The layered plot and fast-paced action make for a quick read that will be especially appealing to middle-grade boys who might otherwise be reluctant to pick up a book.

Politics and espionage combine for a great read.