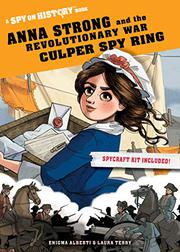 From the Spy on History series

A strong main character and an engaging story make for a revolutionary read.

The career of Anna Strong occupies a fascinating footnote in American history. Was she merely a farmer’s wife, or was she a member of one of the most daring spy rings in our country’s history? The pseudonymous author presents a fictionalized version of Anna’s life in the third volume of the Spy on History series. The examination begins during the throes of the American Revolution. After Anna’s husband is imprisoned and then freed, thanks to Anna’s family connections, and returns to patriot-controlled Connecticut, Anna is pulled into a plot to signal a fellow patriot and pass along information. The plan is simple: Anna uses a black petticoat and a series of handkerchiefs to relay a meeting place. “Alberti” pulls readers into the chaos of Anna’s life (and the war) through an omniscient narrator that documents Anna’s movements over the next year. Astute readers will also realize the dangers women faced from soldiers (and fellow countrymen) during this period. Terry’s loose, two-color illustrations depict an all-white cast and provide an additional sense of movement to the text. The trade edition includes a "Spycraft Kit" in the form of an enclosed envelope with inserts for solving a final coded mystery; the library edition publishes without these inclusions for ease of circulation. Backmatter explains the history of the Culper Spy Ring and its role in exposing Gen. Benedict Arnold.

Spy fans and cryptographers will seek this one out.