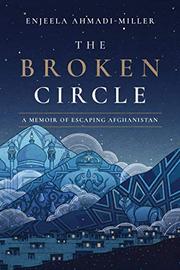 A Memoir of Escaping Afghanistan

Looking back on her perilous flight from Soviet-invaded Afghanistan in 1980, Ahmadi-Miller re-creates a child’s terror and loyalty to her family.

One of eight children in a wealthy family in Kabul, the author remembers her enchanted childhood before war as a time of “fun and camaraderie.” Her father, Padar, an engineer by training, worked at the American Embassy down the street from their house in the Karte Seh neighborhood and also as a landowner. His elegant wife, Miriam, was “a modern woman” who sewed beautiful clothes for the children, although she had a heart problem that would require her to leave for an operation in India. As one of the youngest, Ahmadi-Miller adored her older sisters, who had suitors and fine clothes. As the author records in this fluid text, she grew up in the 1970s, which was “one of the most prosperous periods in the history of Afghanistan,” when privileged children of both sexes were allowed to go to school and there were elements of Western mores and gender equality. However, in the countryside, there still existed devastating poverty and staunchly old-fashioned, conservative beliefs, as she would discover as they fled to Pakistan. With the violent arrival of the socialist, Soviet-backed coup, the family was no longer safe in Kabul. Padar, a proud, devoted Afghan, was being monitored by the Soviets and descended into alcoholism; Miriam fled with two of her children to India, leaving the others to fend for themselves. Even as a young child, the author came to the sinking realization that “Padar would never leave, and Mommy would never return to a country at war” despite Ahmadi-Miller’s ardent hopes that she would. The most harrowing section of the narrative concerns one of the family’s loyal bodyguards and his determination to whisk the remaining children into Pakistan without their father.

Full of vivid detail and emotion, this compelling memoir captures the ache of a young child desperate for safety and security.