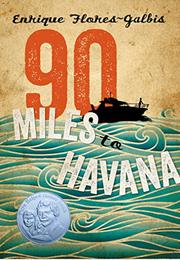 After Castro’s takeover, nine-year-old Julian and his older brothers are sent away by their fearful parents via “Operation Pedro Pan” to a camp in Miami for Cuban-exile children. Here he discovers that a ruthless bully has essentially been put in charge. Julian is quicker-witted than his brothers or anyone else ever imagined, though, and with his inherent smarts, developing maturity and the help of child and adult friends, he learns to navigate the dynamics of the camp and surroundings and grows from the former baby of the family to independence and self-confidence. A daring rescue mission at the end of the novel will have readers rooting for Julian even as it opens his family’s eyes to his courage and resourcefulness. This autobiographical novel is a well-meaning, fast-paced and often exciting read, though at times the writing feels choppy. It will introduce readers to a not-so-distant period whose echoes are still felt today and inspire admiration for young people who had to be brave despite frightening and lonely odds. (Historical fiction. 9-12)