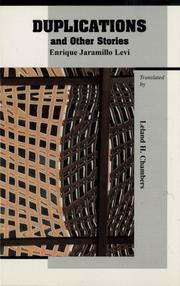 There are so many of these brief, unspectacular stories by the Panamanian Levi that eventually their very number overwhelms. Many of the tales involve male-female relationships, usually with a heavy dose of machismo. In ``The Husband,'' a man spots a woman, apparently a former lover, with her new husband and punches him in the face. In ``While He Lay Sleeping,'' Carlos fantasizes about his first girlfriend, who used to sit and watch while he lifted weights: ``How beautiful her tits look from that angle, so tightly fit into her sweater''). In ``As If There Were Nothing the Matter,'' a woman ponders her sleeping, unfaithful husband, who has slapped her. ``On the Afternoon of the Encounter'' follows a man who fears that his lover is ignoring him and implores friends to find out what is the matter. Other types of sexuality abound here as well, but they are posited as unnatural curiosities. The narrator of ``I'm in Love With You, Sylvia'' watches a neighbor undressing every night, then reveals herself to be a woman. In ``The Spectacle,'' a story that reads like a synopsis of a Penthouse Forum letter, a man takes three female lovers and the four of them eventually begin sleeping together (mainly because the man desires two women at once but is too polite to leave the third out in the cold). When he dies, the three women remain in his home with the three sons they have borne him. There are also tales that manage to render surreal transformation mundane: The narrator of ``The Glasses'' turns into an owl after donning a new pair of spectacles. Although the stories are divided into vaguely titled sections such as ``Alienations,'' ``Incidents,'' and ``Re- Incidents,'' they come at the reader one after the other, never staying long enough to build up any impact. The translation is occasionally jerky, but generally serviceable. Forgettable.