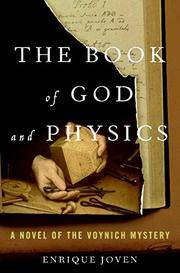 THE BOOK OF GOD AND PHYSICS

Since it resurfaced in 1912, the 15th- or 16th-century Voynich Manuscript has fascinated cryptologists both amateur and professional with its odd drawings and strange text, as yet undeciphered. Joven invents one such amateur cryptologist: Father Hector, a Jesuit science teacher in Spain whose school is soon to be demolished by the city, due to pressure from unknown interests. Hector, along with a circle of online colleagues, spends his time trying to decode the Voynich. His interest in the manuscript deepens after he meets two of his online collaborators in person and, working together, they make a series of breakthroughs that may tie the manuscript to, among others, Tycho Brahe, Johannes Kepler, the court of King Rudolph II of Bohemia and the Jesuits, who seem to have gone to great lengths to keep the book’s meaning hidden. Hector and his colleagues even find a surprising connection in the ancient labyrinth beneath the priest’s school. But someone is dead set against their solving the puzzle, and one of Hector’s collaborators may have an ulterior motive. A fictional adventure surrounding a real-life mystery as fascinating as the Voynich Manuscript ought to be thrilling, but Joven wrecks the pacing by inserting lengthy lectures on a variety of topics, most often the lives of Brahe and Kepler. Attempting to combine enlightenment with entertainment, the author offers too much of the former and not enough of the latter. In addition, many of the solutions to the puzzles the trio encounters aren’t satisfying; the required clues are not necessarily provided, or they hinge on knowledge of esoteric topics in science, history and architecture. Finally, the trio never seems to be in any real danger, which robs the story of drama.

Too many history lectures and not enough tension.