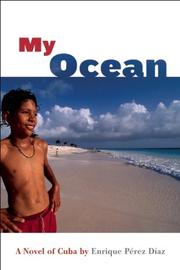 In a long, introspective letter to the sea that surrounds his island, a Cuban lad reflects on his inner and outer lives. Feeling sometimes as if everyone is leaving for “El Norte,” 12-year-old Enrique notes the steady departures of relatives and acquaintances against a backdrop of school days, family visits and walks along the beach. The prose is often lyrical; on the relationship between his country and the United States, for instance, he writes: “There’s so much distance between us. So much forgetting, so many good-byes. So much silence because of words never said. So many tears never cried and laughter never heard.” On the other hand, because he relates everything from expressions of his growing sense of isolation to multiple encounters with bandits and sharks in the same level voice, there’s a detached quality to his narrative that is likely to leave most readers unengaged. Not as intensely felt as such similar monologues as the author’s Letters from Alain (2008) or Teresa Cardenas’s Letters to My Mother (2006), this still has value for its focus on the ones who stay behind. (Fiction. 11-13)