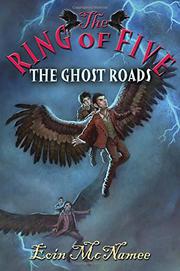 From the Ring of Five series, volume 3

This finale to the Ring of Five trilogy demonstrates the skills that make its author so successful in creating fantasy and thriller stories. It is a (very suspenseful) delight to read.

Danny Caulfield is on the run. His archenemy, Ambrose Longford, head of the Ring of Five, has infiltrated the Upper World, convincing the authorities that Danny is a dangerous threat to both worlds. In his journey back to Wilsons Academy of the Devious Arts, Danny travels the ghost roads, finds a resistance group founded by his parents and sails on a mysterious river that passes through both worlds. Known characters reappear, and new ones join the roster. Danny’s odyssey through the Upper and Lower Worlds takes readers to unexpected locales in both places. Double-crosses and betrayals abound, keeping readers’ attention and building anticipation of a rip-roaring ending—which does not disappoint. Fans of the first two books in this suspenseful and engrossing series will be totally satisfied, while skillful integration of previous events will enable newcomers to follow the story.

Surprises, plot twists and shocking revelations characterize this book and deliver the proper ending for a splendid trilogy