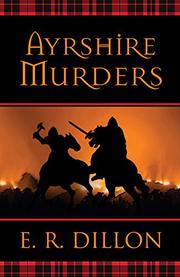 After he lost his wife and child in a fire, Kyle Shaw hired out his battle-ax to King Philip of France. When he returns to his home in Ayrshire, Scotland, he agrees to resume his former post of deputy to the ailing sheriff Reginald de Crawford, even though the office has diminished over the years. The Scottish king is the prisoner of Edward Longshanks, King of England, whose soldiers have occupied Scotland and assumed increasing power, especially Sir Henry de Percy, the Castellan of Ayr. Although Kyle is able to fend off a band of English raiders stealing sheep from a small holding, he’s hard-pressed to demand justice for the victim, who claims that what the English, or Southrons, can’t confiscate legally, they simply seize. When Megan Brodie, a girl of 16, is raped and murdered, Kyle asks an apothecary friend to examine the girl’s body and learns she was pregnant. Megan’s father insists that Lucky Jack Sweeney, captain of horse at Ayr Garrison, is the murderer, and Kyle suspects the Englishman is also the father of Megan’s child. But the deputy must proceed cautiously and prevent the aggrieved father from avenging his daughter’s defiling and death. Good Scotsman though he is, Kyle is bound to keep civil order and follow English law, much as he doubts that Sir Henry will take action against his own countryman. Kyle is also charged with protecting a royal envoy to Philip at the same time painful rumors about his father’s death five years ago add to his grief, which a hint of romance to come could ease.

Although the Scottish hero and his apothecary sidekick in Dillon’s series debut are a mite anachronistic in their pursuit of forensic science, Kyle is an attractive hero trying to do right by both Southrons and Scots.