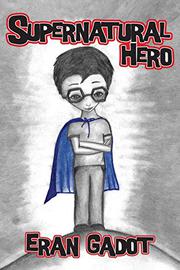 Remarkably, this ghost story is much sadder before Andy’s grandfather dies than afterward.

This middle-grade fantasy opens by showing the full pain of losing someone to cancer. At the funeral, in a lovely moment, Andy thinks, “I can’t tell if they’re all crying for Grandpa or if other people have died as well and they’re also being buried today. I don’t dare ask anyone.” But when Grandpa comes back as a spirit, the book turns instantly hopeful. He’s smiling, and he promises never to leave his grandson. The change in tone works surprisingly well at first, but in its later chapters, the book becomes a comic adventure, with Grandpa giving Andy tips on how to woo his crush, and then, abruptly, a thriller, complete with an evil phantom who threatens said crush. This figure appears and, literally, disappears with so little warning that the novel turns into a cartoon, but Krac’s surreal, smudged gray-black drawings are so disturbing that they add a whole layer of menace to the story. Unfortunately, they don’t make the underwritten love interest any less of a cliché (or the cast less uniformly white). Gadot leaves too many plot points unexplained—perhaps to set up later books in the trilogy—but in its slowest, most nuanced scenes, this story about ghosts shows the entire richness of life.

A paranormal that’s at its best when it’s real.