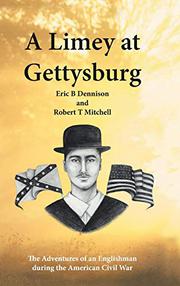 A LIMEY AT GETTYSBURG

The Adventures of an Englishman During the American Civil War
by Eric B Dennison and Robert T Mitchell
BUY NOW FROM
AMAZON
BARNES & NOBLE
LOCAL BOOKSELLER
GET WEEKLY BOOK RECOMMENDATIONS:

In Dennison and Mitchell’s debut historical novel, a British reporter is sent to the United States to cover the Civil War and gets drawn into a wild adventure.

Firth Brown is a journalist for a local newspaper, the Manchester Echo, and the 20-year-old is in no position to refuse even the least attractive assignment. His imperious boss, William Smythe, decides to dispatch Firth to the United States “to be on the spot if a war starts”—it’s 1861, and the first signs of war between the North and South are starting to show. Firth must decamp the very next morning for a trip that’s projected to last a few months. It’s a move, however, that costs him his fiancee. When he finally arrives in Washington, he has little guidance and just $10 in his pocket—the contemporary equivalent of less than $300. He’s staying in a dingy hotel that’s not far from the White House, and he quickly makes the acquaintance of the beautiful Elizabeth Burkett, to whom he becomes engaged with impressive speed. But the trip turns out to be much more than he bargained for: Elizabeth’s father, George, disapproves of the match and only reluctantly accepts Firth into the family—if the latter accepts a dangerous mission to Philadelphia. Dennison and Mitchell buoyantly chronicle Firth’s sometimes-farcical exploits—he dodges no less than three attempts on his life during that fateful trip, and he ultimately finds himself separated from Elizabeth. The plot will strain readers’ credulity but never their patience; despite its quixotic character, or possibly because of it, the story remains consistently engaging. The novel also has a more serious side, as the authors deftly imagine the very beginnings of the war; once it fully ignites, they write of “Nightmares of carnage, gore, and the never-ending stream of injured men.” Also, the book thoughtfully reflects on the human cost on both sides of the conflict.