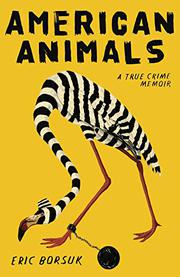 A portrait of the writer as a hapless criminal.

Borsuk’s decent command of his material is at odds with the protagonist’s cluelessness, which itself seems odd because the author and protagonist are one and the same. The narrative gives no indication of the distance between the two, only that the events described took place when the author was 19, on the verge of dropping out of college, and hanging out with two friends who had become even less anchored than he was. Their house served as a central gathering place and crash pad, where Warren (no last names) liked to get naked when the party was in full swing. Amid the alcohol-and-pot–induced haze, Warren enlisted the author and their other friend, Spencer, to steal rare books and artwork from a university library. Paranoid from the pot, Spencer believed Warren and the author were planning to murder him. In terms of pacing and character development, the author is mostly in control of these out-of-control conspirators. Warren, we learn, is “a weasel-like creature, agile, hard to pin down,” something of a scam artist, who may or may not have been responsible for some of Borsuk’s disappearing funds. The author had long planned to join the FBI, as his uncle had, until college, when he “suddenly found myself on the opposite side of the law, immersed in a life of crime for no apparent reason.” Judging by the narrative, a tie-in to the film of the same name, Borsuk didn’t even believe it as he was immersed in it, helping plot a robbery that he didn’t think would happen. Then he found himself doing what he thought he never would, tying up an elderly librarian, whose screams continue to haunt him, as they made their escape from the library. The caper fell apart, and so does the narrative, as the three try to figure out what comes next.

If the story sounds appealing, go see the movie.