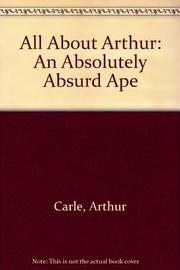 "In Atlanta one autumn day an absolutely absurd accordion-playing ape named Arthur felt all alone." But then in Baltimore he befriended a bashful banjo-playing bear named Ben, in Cincinnati he came across a cool calico cat named Cindy, and by the time he's encountered a magnificent mouse named Max in Memphis, a silly sun-scorched seal named Sally south of Seattle, and all the other flat black woodcut animals needed to complete the alphabet, we've seen so many crowded pages and heard so many identical introductions ("In Jacksonville he met. . . . In Kansas City he met. . . . In Louisville he met. . . .") that a little solitude would be welcome. However, Carle's colored closeup photos — of the Bloomingdale B, Luchow's neon L, and other brass, tile, raised or painted upper case letters on variously textured surfaces — do give children a new and open ended way of viewing their ABC's.