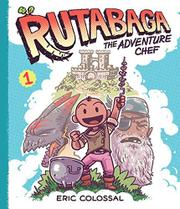 From the Rutabaga the Adventure Chief series, volume 1

In a land with dragons and other monsters, a happy-go-lucky chef can also be a hero.

Rutabaga is a chef on a journey to find the rarest, tastiest ingredients to use in his cooking. He’s a foodie Indiana Jones for the junior set: When he finds a legendary sword, he wants only the mushrooms growing on it, happily surrendering the sword itself to the next person who arrives. Though Rutabaga isn’t a warrior or wizard, his culinary expertise often comes in handy; for example, he’s able to deduce what food might nourish an ailing royal pet. Colossal’s full-color, cartoonish illustrations, with their heavy linework and simple figures, match the light, goofy tone of the stories. When Rutabaga gets cooking, Colossal exploits the graphic form to break down the action into numbered steps reminiscent of real cookbooks. The slapstick humor entertains but leaves little space for genuine character development, and the characters’ determinedly colloquial speech highlights the flimsiness of the faux medieval setting. Recipes scattered throughout allow kids to test their own cooking skills, at least on the ones with real-world ingredients. (Taste testers should be warned that one recipe features crushed cinnamon breath mints as an ingredient.)

Colossal’s debut outing is a cheerful if unexceptional popcorn read.