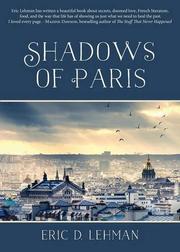 Travel and history writer Lehman (Connecticut Town Greens, 2015, etc.) turns his hand to fiction in this short novel set in the City of Lights.

American William Byrnes has taken a teaching position at École Eustache, a private school in Paris, despite his abysmal French. However, he can’t escape the guilty weight of a past tragedy for which he tries to atone by leading a Spartan, lonely life, living in a school-provided apartment decorated with West African art by his Nigerian predecessor. He lives on oatmeal, rice, and strong tea, stubbornly oblivious to the delights of the city. That changes when his boss, Monsieur Cygne, tasks him with reading Émile Zola’s 1873 novel The Belly of Paris and sends him to Librarie Anglais Rose, an English-language bookstore owned by beautiful Massachusetts expatriate Lucy Navarre. She insists on adding to his reading list—including works by Arthur Rimbaud, Charles Baudelaire, and Honoré de Balzac—and soon the two are spending leisurely Saturdays exploring the Paris that William has ignored until now. Though she has an absent French husband and he wears a wedding ring, they become emotionally intimate, eventually trading painful secrets. Overall, this slim volume contains little incident, instead sketching the two characters as they connect to both the city and each other; at one point, for example, Lucy’s gray eyes remind William of “the Seine after rain, or the winter sycamores of the Champ-de-Mars from a distance.” Indeed, Lehman’s brevity is his strength, as drawing out the story might have ruined its quiet pacing and intensity. Toward the end of the book, Monsieur Cygne asks William what he’s learned about French literature, to which he answers, “I would say it is about the inevitability of loss”—and so is Lehman’s tale.

A lyrical, lovely story of doomed romance that doesn’t overstay its welcome.