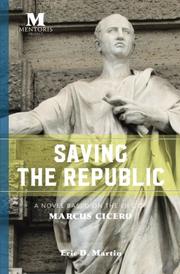 A Novel Based on the Life of Marcus Cicero

A novelistic depiction of the famed politician and orator Cicero’s lifetime of devotion to the Roman Republic.

As depicted here, Marcus Tullius Cicero is born in 106 B.C.E. in the rural province of Arpino, and he’s an unhealthy baby, expected to die soon after his birth. He survives, although he’s plagued by sickness throughout his childhood and bullied by his peers. In Cicero’s late teens, Gaius Marius takes over the top position of Roman consul and refuses to relinquish power. Lucius Cornelius Sulla organizes an army to oppose his despotic designs. Cicero joins this army out of loyalty to the republic, ascends the ranks due to his sharp strategic mind, and eventually becomes Sulla’s trusted adviser. However, Sulla has tyrannical ambitions of his own, and when he announces his plan to storm Rome after the death of Marius and his henchman, Cinna, Cicero protests and returns home to Rome. He becomes a lawyer and rises to notoriety after he takes a case defending the unpopular Sextus Roscius, who’s accused of murdering his father; in this telling, Cicero proves that Sextus was framed by Lucius Sergius Catiline. Cicero is expelled from Rome as a result and made quaestor of Sicily; there, he opposes the local governor, who bilks his citizens through illegal taxation. Cicero eventually returns to Rome and becomes a senator, and he successfully opposes the power-hungry Catiline for the seat of consul. However, his career never quite recovers politically—he’s simply made too many enemies. Debut author Martin vividly captures Cicero’s unflagging commitment to the republic of Rome in this fictional dramatization. The prose is straightforward and unembellished but powerful, and the author mostly maintains historical accuracy, with some occasional storytelling license. The author also includes a riveting subplot about Cicero’s friendship with Julius Caesar, whose own fidelity to republicanism wasn’t nearly as uncompromising as Cicero’s. The novel is part of the Barbera Foundation’s Mentor Project series, dedicated to the portraiture of historically significant Italians. Besides its biographical content, its depiction of Cicero also movingly captures his stoical composure in the face of grave danger.

A wonderfully concise distillation of one of the greatest advocates of republicanism.