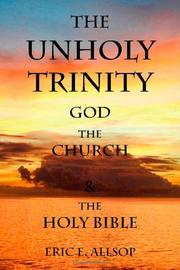 God, the Church & the Holy Bible

Allsop’s theological treatise radically re-examines the Bible as a source of revelation and moral instruction, while reassessing the relationship it prescribes between God and man.

Writing in response to his crisis of faith, Allsop scours the Bible for a universally applicable doctrine and comes up empty. Instead, he finds a pastiche of apocryphal stories, irresolvable contradictions and some genuinely edifying moral lessons that only make sense when considered in their context. He adumbrates an interpretive approach that views biblical writing as the work of fallible human beings rather than the divinely inspired word of God. This leads to fundamental reconsiderations of basic church teachings like the divinity and resurrection of Christ, the intelligibility of the Apostles’ Creed, the nature of petitionary prayer and the promise of personal immortality. The author’s view that God refrains from directly intervening in human affairs functions as the crux of his attempt to wrestle biblical principles from their institutional misinterpretations. Allsop’s writing is admirably lucid, even breezy, for such a weighty topic. However, his tone sometimes becomes overly strident, frequently proclaiming too confidently what is “obvious to any reasonably careful reader.” Also, he has a tendency to present arguments as “personal reflections” rather than occasions for scholarly exegesis. Given that the nature of his topic depends on close textual analysis, the author should more frequently and rigorously engage the massive body of scholarship that presents alternatives to his often idiosyncratic readings. Finally, episodic excursions into political commentary about topics such as terrorism and environmental disaster are more distracting than edifying, not to mention dyspeptic—he refers to the “unfolding story of the human race” as a “black comedy.” Still, the author makes a moving argument for taking the Bible seriously, since it expresses “moral principles that resonate with our deepest sense of what is right and promises that meet our deepest longings.”

More provocative than exacting, this re-evaluation of religious dogma will appeal to anyone who wants an intellectually light, accessible introduction to scripture-based skepticism.