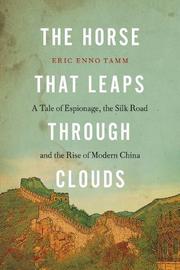 THE HORSE THAT LEAPS THROUGH CLOUDS

A Tale of Espionage, the Silk Road, and the Rise of Modern China

The account of the secretive two-year journey undertaken by Baron Gustaf Mannerheim was not published until 1940, when it was highly admired by Hitler. Journalist Tamm (Beyond the Outer Shores: The Untold Odyssey of Ed Ricketts, the Pioneering Ecologist Who Inspired John Steinbeck and Joseph Campbell, 2004, etc.) only discovered Mannerheim’s Across Asia from West to East recently, and embarked on his trip in 2006 to retrace the baron’s arduous ethnographic journey through the last years of the Qing Dynasty, when modern currents were eradicating the old order—not unlike the cataclysmic changes shaking China to this day. In 1906, Russia was reeling from its humiliating defeat by Japan in the Russo-Japanese War, and enlisted Mannerheim, an officer in the Imperial Army, to undertake the mission through the Asian provinces to gather information on all aspects of Chinese reforms, defensive preparations, politics, colonization and the role of the Dalai Lama (whom Mannerheim got to meet), all in preparation for a possible Russian military incursion. Like Mannerheim, Tamm is intensely curious about the role of China on the world stage, and pursues similar questions about what kind of China will emerge from these wrenching attempts at modernization. Tramping from St. Petersburg to Peking proved a mind-boggling trajectory, penetrating myriad ethnic pockets, Mannerheim by caravan, Tamm by airplane, train, bus and car. Each man encountered all manner of suspicious or friendly people, mishaps and illness. Along the way, Tamm read Mannerheim’s diary—“aloof, impersonal and even churlish at times”—to gain a deeper understanding of this singular character. A well-edited work chronicling a truly inspired journey, leaving readers hopeful about Chinese progress as well as full of questions.