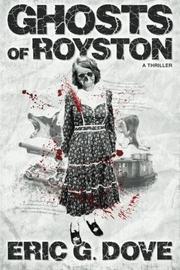 Ghosts of Royston - A Thriller

Dove’s impressive debut is a well-paced thriller with supernatural touches that follows a family in the aftermath of a tragic car accident.

Dove uses a somewhat unconventional format, following two main characters in alternating chapters, designating the intertwining narratives “The Book of Ruthie” and “The Book of Cole.” Ruthie is actually Sophie Danner, a teenage girl kidnapped from the scene of the car accident and taken hostage by a family in a backwater shack. Gabriel, the main heavy, brings Sophie home and tells his mentally disturbed mother, Cora, that Sophie is her daughter Ruthie, believed to have drowned years ago when she was 4. Cole is Sophie’s father, and his first-person chapters cover his search for Sophie and his wife, Natalie, as he’s guided by a force he can’t explain. The characters are vivid, their dialogue fit perfectly to them, each with a unique voice. Sophie is determined, Gabriel terrifying, and Cole’s struggle to retain his sanity is palpable. In some of the early moments, Cora echoes Annie Wilkes, the psychotic nurse from Stephen King’s Misery, a bit too closely, but Dove separates the stories enough that his ultimately feels more like an homage than theft. Armed with a solid premise, Dove knows how to bring it to life. There’s a minor misstep, though, in adding another section as well as another point of view in the final third of the book as the action rises to its peak. Other than that, Dove does a fantastic job of fitting together Sophie’s third-person narrative and Cole’s first-person narrative, heightening the suspense as Sophie deals with the menace of Gabriel and the unhinged Cora, while Cole’s “flashbacks” lead him to solve the mystery of his accident and the disappearance of his family from the scene. Fortunately, Dove uses the possibility of a supernatural connection sparingly enough to keep the story rooted in reality, and he shades the action with occasional humor to color the well-built personalities.

This promising new writer might borrow from the masters, but he’s primed for loyal fans of his own.