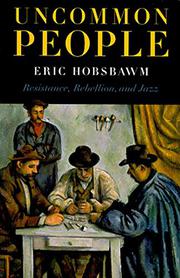 A collection of occasional pieces, journal articles, and reviews by one of our great historians (The Age of Extremes, 1995, etc.), showing off his catholicity of interests. Hobsbawm’s recurring concern in this new volume (15 of the 26 essays are previously uncollected in book form) is the forgotten men and women—the poor, the working class—who would have slipped through the cracks of macro-history were it not for his own work and that of others who write “history from below.” Even his jazz criticism is informed by this impulse—jazz, he writes, is “one of the few developments in the major arts entirely rooted in the lives of poor people,” a premise that is debatable but not uninformed. The book falls neatly into sections: a series of essays on questions of English working-class history, another on peasantry and social banditry (a Hobsbawm specialty), reflections on recent history, most of it American; several jazz pieces; and a closing meditation on the Columbus quincentenary. An economic historian by training and persuasion, Hobsbawm is at his best when using a seemingly irrelevant detail to elucidate larger trends, as in an aside on the simultaneous rise of the cloth worker’s cap, the school tie, and the private golf club in Victorian England, signs of emerging class stratification. It is hard to imagine any other historian who could make such fruitful use of the class implications of the rise of the fish-and-chip shop from the increase of purchases of industrial fish fryers. As a jazz critic, Hobsbawm brings a similarly astute sense of the interrelationship of social and economic history; regrettably, his sense of the music itself is not nearly as artistic. A collection of Hobsbawm’s writing is always welcome, and this one unearths some buried gems.