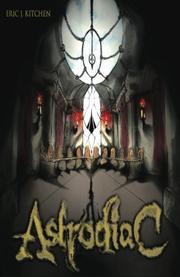 From the Astrodiac series, volume 1

Crime is a rarity in the land of Austere, thanks largely to the Art of War Law, which prohibits any citizen from bearing arms or forming armies. The law was passed by the 13-member Hierarchy, 12 of whom are Signed—marked at birth with an astrological sign and a special power. Sarai Divens, a Signed, telekinetic Capricorn, challenges the current Hierarchy Capricorn member, Hex; she aims to get justice for her mother’s murder. Meanwhile, Ian Radke, an Unsigned, craves vengeance against the man responsible for his father’s death. The long-standing Scorpio of the Hierarchy, Julius Blackwood, defies the law by secretly recruiting an army of his own to defend against those who would harm Signed people. Sure enough, a group of Unsigned slowly emerges that’s dead-set on eliminating not just Signed Hierarchy members, but all Signed citizens. Potential obstacles for that group include Cade Henson, who’s looking for his late father’s mysterious research, and Ava, who somehow bears the mark of four Signs instead of the usual one. Readers will find the powers on display to be familiar (Aries people have superior strength; Virgos have a healing capability). But Kitchen excels at molding and interweaving his characters’ individual stories. Ava, for example, is shown to have the potential to be the most formidable citizen in Austere, but she’s also still a teenager who often can’t control her powers. In her initial encounter with Ian, he’s fleeing the consequences of one of his many fights, resulting in an intense meet-cute in which their ensuing romantic feelings happen organically. The author also aptly and subtly incorporates social themes into the narrative, such as discrimination—the ruling Signs, for example, reputedly make up a mere 10 percent of the population. Several unresolved subplots practically guarantee a sequel to come.

An often riveting tale that develops its characters as well as it does its steadily paced narrative.