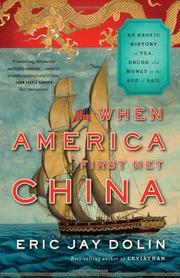 An Exotic History of Tea, Drugs, and Money in the Age of Sail

The author of Fur, Fortune, and Empire: The Epic History of the Fur Trade in America (2010) returns with the story of America’s first voyages to the Middle Kingdom, where Americans and Chinese looked at each other with wonder, alarm and calculation.

Dolin begins at the end of the American Revolution. With America’s relationship with England in ruins, the country looked to the Far East. On July 22, 1784, the Empress of China sailed into the Pearl River in China. The author, whose grasp of the intricacies of international trade is firm, proceeds confidently and skillfully through a complex narrative. He describes the beginnings of trade with China, examines the mystery of silkworms and shows how China established Canton as the center for their trade with the West, whose residents craved silk but also tea (and serving sets). Soon, thousands of vessels—British and American—were sailing on the Pearl, and the most profitable commodity swiftly became opium. Everyone loved it, especially the English and the Chinese, and Americans profited handsomely from the trade. Dolin introduces us to some important American names—including Robert Morris, John Ledyard, John Jacob Astor, Robert Forbes, Harriet Low—and he relates the adventures of the first Chinese to come to America, who became sort of carnival attractions. The author also describes the perils of the voyage, the designs of the ships (and the rise and fall of the clipper ship) and the American involvement in the Opium War.

A rich, highly readable examination of the seeds of poppies, trade, greed, grandeur and an international partnership that remains uneasy and perilous.