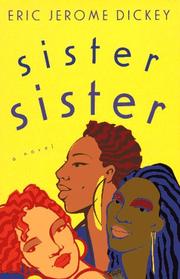 Newcomer Dickey is a witty, observant cousin to such writers as Terry McMillan and Connie Briscoe . . . with one major distinction: Dickey's a guy. Inda (``Linda, without the `L' ''), Valerie, and Thaddeus are siblings in Los Angeles with a white ``moms,'' a black ``pops,'' and a whole lot goin' on. Inda, the oldest, is fiercely protective of her siblings. She's also the most independent, as a children's social worker with a Stanford MBA and a 'tude to match her credentials. Valerie is married to Walter, a failed football player who treats her like dirt. Thaddeus is a Federal Express employee with a tough homeboy exterior and a soft side known only to his sisters. Complications ensue when Inda discovers her current flame, Raymond, in bed with ``his fiancÇe,'' Gina, while she's in the company of Chiquita, who, unbeknownst to her (but not for long) is also one of Raymond's lovers. The two women forge a friendship on the most unlikely foundation: having been cheated on by the same man. Then Valerie meets David, a mild-mannered jogger who's had his eye on her, and rediscovers her own value. Thaddeus falls in love with Chiquita and helps her come to terms with her checkered past, making himself vulnerable in the process. Dickey piles on the messages with abandon, debunking stereotypes left and right; if you see all men as dogs, all brothas as dangerous, and all sistahs as out for number one, he's determined to set you straight. He finds his way to his main points in the long run, but they're hammered home so hard you'll almost wish he hadn't: A sister is someone who looks out for you, a brother is someone who treats you right, and real friendship, loving family, and self-respect are worth more than gold. Told in alternating chapters by the three women characters, Dickey's spirited, mostly successful debut novel suffers only from a roughness around the edges and a wearing earnestness. (Author tour)