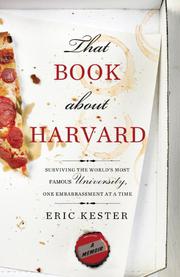 THAT BOOK ABOUT HARVARD

Surviving the World's Most (In)famous University, One Embarrassment at a Time

In which the author copes with attending the world’s most demanding institution of higher learning by reducing it to middle-school jokes.

Like many freshmen at Harvard, Kester suffered a rude awakening during his first weeks on campus: The smartest kid in his hometown had quickly morphed into, at best, a mediocrity. Academically he couldn’t crack calculus, and he was performing poorly everywhere else too: He locked himself out of his dorm room on move-in day, wearing only his boxers; he rode the bench on the football team; he felt alienated from the sons of old-money Brahmins at the campus’ final clubs. Such modest suffering shouldn’t merit a full-length memoir, a shortcoming Kester attempts to resolve by couching every modest indignity in lowbrow humor. If the book’s cast of characters aren’t actually invented, they certainly adhere to college-comedy stereotypes: the hotheaded football coach, the nerdy math whiz who uses hip-hop slang to boast about his nonexistent sexual prowess, the wacky roommate and the out-of-touch college president. The book’s driving force is the most clichéd stereotype of all: the gorgeous, unattainable co-ed. Much of the first half of the book follows Kester’s mooning over this “smokeshow” from a distance, his attempts to catch her attention derailed by some embarrassment or other. The author alternates anecdotes about the downsides of Harvard life (Adderall popping, cheating, constant insecurity) with tales of hijinks. But his comfort zone is cheeseball shtick, from mocking foreign accents to bathroom humor—which makes the final pages’ platitudes about growing maturity and respect for diversity ring all the more hollow.

College humor is supposed to be a little lowbrow, but Kester is stuck in a mode of repetitive and ultimately tiring gags.