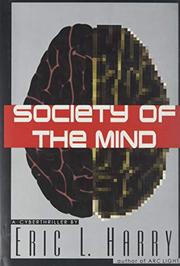 SOCIETY OF THE MIND

Gee whiz techno-thriller about the evolution of computers, from the author of Arc Light (1994). The human story here is blander than a Harlequin: Laura Aldrich, lonely Harvard psychology professor, whose brilliance is misunderstood by her stick-in-the-mud, tenure-seeking colleagues, receives a letter from a famous industrialist, Joseph Gray, offering her a million dollars for one week's work. She's heard terrible things about this Gray fellow, but a million dollars is a lot of money, so she boards a jet for an island in the South Pacific. Shades of Dr. No and Dr. Moreau: Gray appears to be a mad scientist, shooting off rockets and developing a super computer at depths below the ocean floor, but really he's just a lonely, overworked guy; unknown to Laura or Gray, the computer has matched the pair as perfect for each other. Anyhow, Laura's job is to analyze the computer to decide (1) if it has achieved sentience, and (2) if it's depressed. Yes—in both cases: Gray's magnificent computer is a very upset adolescent girl named Gina. Harry plays out this nonsense with a dour seriousness, but the ideas he puts forth, and his knowledge of computing, are extremely engaging. Laura's conversations with Gina, Gina's paranoid fears of an ``Other'' gradually usurping her functions, driverless cars, virtual reality, the limits of digital computing, the advent of ``neurocomputing'' and true artificial intelligence, high-level robots that evolve from infancy into adolescence, the necessity of space exploration, rocketry, and mining in space are all discussed with informed, cutting-edge flair, and it's refreshing to read a tale of this sort in which the computer fails to run amok. Harry has a first-rate speculative mind well grounded in current science. His thriller, however, ain't thrilling. On a scale of one to ten: story, one; technology, ten. ($60,000 ad/promo; author tour)