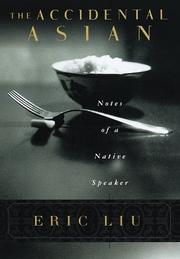 Notes of a Native Speaker

Provocative musings on the subjects of race and identity from the perspective of a second-generation Chinese professional. Liu, a former speechwriter for President Clinton, recounts his past and present struggles with his Chinese identity in a society into which he has easily assimilated. Caught between two cultures, Liu finds himself at home in neither. In trying to define something uniquely Chinese about his upbringing as the son of two educated upper-middle-class professionals, Liu recalls his father’s “honorable” struggle to hide from friends and family members his years on dialysis after his kidneys failed. “As a Chinese boy in an American world, I was accustomed to facades,” he states. But in retrospect he wonders if this concern with image and normalcy is particularly Chinese or simply human. Now, as a Harvard Law student married to a white woman, Liu is conscious of his race primarily when racism rears its head, as it did in the recent scandal over whether the Chinese government attempted to influence the 1996 presidential election. Otherwise, Liu’s sense of himself as an Asian-American is purely “accidental,” an invented identity thrust upon him and other Asians who have almost nothing in common. They do not, for instance, share a common religious faith or heritage, which makes it even harder for them to identify as a distinct group. Ambivalent throughout as to the values of particularism versus universalism, Liu finally emerges as a universalist who chooses not to incorporate Chinese ritual into his wedding. “I certainly won’t want to infect my Chinese-Scotch-Irish-Jewish children with bloodline fever. I won’t force them to choose among ill-fitting racial uniforms,” he writes. Incisive, balanced, and frank, The Accidental Asian deals persuasively with the often-overlooked struggles Asian-Americans face in defining their identity in the turbulent American landscape. (Author tour)