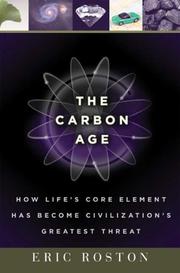 Both human life and civilization depend on carbon, the author avers. We may be mostly water, but by dry weight we’re mostly carbon. Carbon cycling through the atmosphere, oceans and land influences life, and life influences carbon cycling. Roston begins with the Big Bang and in Part I, “The Natural,” ranges over topics from the origins of life to body heat. Part II, “The Unnatural,” covers the past 150 years, during which industry and an expanding population have created an industrial carbon cycle. Primitive organisms appeared soon after the earth cooled four billion years ago. Soon after came photosynthesis, which uses the sun’s energy, water and carbon dioxide to produce complex carbon compounds and oxygen. This eventually generated enough oxygen to influence the carbon cycle, which means it influenced weather. Most atmospheric carbon (i.e., carbon dioxide) is produced by volcanoes and the weathering of rock; it disappears into oceans and deep into the earth. Carbon dioxide from living things exerted only a modest influence on this cycle until the 19th century, when human ingenuity began reversing photosynthesis on a massive scale: converting oxygen and carbon compounds (wood, coal, oil, gas) back into water and carbon dioxide. It’s pouring into the atmosphere faster than oceans, land and shrinking forests can absorb it, and carbon dioxide acts as an insulator, allowing sunlight to heat the earth but preventing heat from radiating back into space. Atmospheric carbon dioxide has risen and fallen throughout earth’s history, but no natural process can match today’s spectacular outpouring. Readers searching for a systematic report on global warming should read Al Gore or Bill McKibben. Roston devotes several chapters to the subject, but he maintains a focus on carbon itself: its role in the formation of Earth, earthly life, human life and human industry.