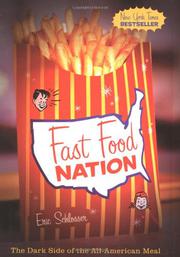 The Dark Side of the All-American Meal

A tale full of sound, fury, and popping grease.

Fattening up a controversial article published in Rolling Stone in 1999, Schlosser considers all the ways in which fast food has lessened the quality of life in America. His chief objection is not that it tastes bad—far from it, he insists, going on to examine, for instance, why McDonald’s fries (lauded by the likes of Julia Child and James Beard) are so irresistible. (The beef extract helps. Don’t tell your vegetarian friends.) Neither is it the fact that fast food, on which Americans will have spent more than $110 billion in 2000 (as against $6 billion in 1970), has resulted in an appallingly obese population in a country where fresh food is scarce but chemical-laden victuals are easily had. Schlosser rightly decries these developments, which he calls the “McDonaldization” of the planet (“wherever America’s fast food chains go, waistlines start expanding”). But what seems to bother him most is the absolute accessibility of fast food here—and, increasingly, throughout the world as well, inasmuch as for every fast-food restaurant that opens in the US, four more open abroad. “Fast food,” Schlosser writes, “is now served at restaurants and drive-throughs, at stadiums, airports, zoos, high schools, elementary schools, and universities, on cruise ships, trains, and airplanes, at K-Marts, Wal-Marts, gas stations, and even at hospital cafeterias.” This ubiquity spreads beyond the eatery: many nonfood businesses, notably The Gap, have thrived by following the fast-food model of simplicity, uniformity, and replicability, so that a storefront in Tuscaloosa is no different from one in Toronto or Taipei. It all ends, Schlosser suggests, in a grim and gray world in which the corporate is triumphant, and quality finds no home.

An exemplary blend of polemic and journalism, guaranteed to put you off your lunch.