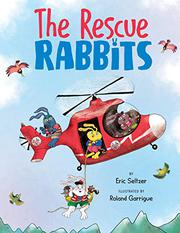 Animals in trouble? Who you gonna call? Rescue Rabbits!

Ace, Chip, Dot, and Spot are the Rescue Rabbits. From Rescue Rabbit Headquarters, they use their high-tech gadgets and machines as well as their smarts to rescue animals of all species. They lift Edgar Elephant with their Rescue Rabbits Super-Excavator in order to extract a thorn from his foot. They block traffic with their Rescue Rabbits Limo to allow the Duckling family to cross the street. But their big rescue of the day begins with a call on their Special-Ops Telephone: Prince Rex the Rhino is stuck up a tree with ants in his pants and chopsticks up his nose. When they locate him, the ants and the chopsticks are easy to take care of, but getting him out of the tree proves difficult. He won’t use a ladder or a rope. The Rescue Rabbits bring in Queen Rex, who scares her kid out of the tree and promptly forgives him for using her chopsticks to free her ants from her ant farm. Seltzer’s text unfolds in a combination of speech bubbles and narrative text with tech-words highlighted in red. The perfusion of technobabble does not hide the fact that the story itself is forced. Garrigue’s Richard Scarry–esque cartoons also try too hard, and the combo makes less sense that it ought.