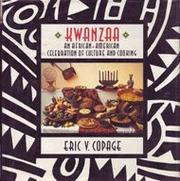 An African-American Celebration of Culture and Cooking

Kwanzaa is an invented holiday, created in 1966 by African- American Maulana Karenga, who, Copage (a New York Times Magazine editor) here says, ``synthesized elements from many African harvest festivals.'' Observed throughout the week after Christmas by an increasing number of black Americans, it is loaded with symbolic rituals and capped by a feast on December 31 or January 1. As Copage describes it, the holiday is approached in a spirit of ``jazzy'' improvisation: Some celebrate Kwanzaa instead of Christmas, some after, and some ``Kwanzafy'' their Christmas celebrations. And, as with any celebration, the food is crucial. Copage, who writes well and with a mercifully light touch, has put his book together in the same spirit, including African folktales, profiles of black Americans, anecdotes and significant events from black history, and a lot more. It's all relatable to black pride and Kwanzaa principles, thus proper food for thought for families celebrating this evolving holiday, though often far removed from the purview of a conventional cookbook. Still, cookbook it is, with more than 125 recipes—ranging from grilled marinated rabbit to sweet-potato muffins—that do full justice to black cuisine as it has evolved in Africa, Brazil, the Caribbean, and the American South. The recipes and Copage's concise and personable background notes show respect for the food as well as the culture—and they outclass any existing Kwanzaa material by leagues.