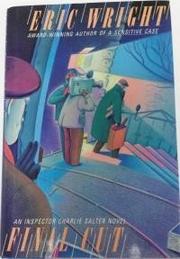 The ongoing adventures of Inspector Charlie Salter (A Sensitive Case, 1990, etc.) have achieved their popularity primarily because readers have always been as interested in his private life as in his investigations, but Wright may be counting a bit too much on Charlie's innate likability in this eighth adventure. Here Salter poses as the police adviser to the filming of an international thriller in Toronto so that he can investigate what appears to be a concentrated effort to sabotage the project. Although no one seems to have a real motive, a lot of the people involved have reasons to dislike one another. The most disagreeable character of all is the scriptwriter, who eventually (although later than usual in a book of this sort) ends up quite dead. While Charlie figures out whodunit in this strangely uninvolving tale (and comes to a surprising decision about what to do with that knowledge), dedicated fans will be more interested in activities on the home front, where younger son Seth has decided to become a ballet dancer, much to the Inspector's chagrin. Amiable and pleasant though he may be, Charlie Salter desperately needs a case with some substance to it.